Add My Business Add My Event

It's such a huge sigh of relief that my search for a qualified roofing contractor has come to an end.
Review for Goldenberg Roofing Queens NY by Leah
Rating:

Just by the way they carry out their business, you could easily tell they are a very skillful set.
Review for VIP CT Car Leasing Stamford by Leah
Rating:

A class work, and the best prices. Give him a try you will not regret it.
Review for VIP CT Car Leasing Stamford by Douglas
Rating:

I got a great deal , I'm so glad I went with VIP CT Car Leasing Stamford !
Review for VIP Car Leasing Long Island by Julie
Rating:

I had an amazing experience and would recommend them to everyone!! 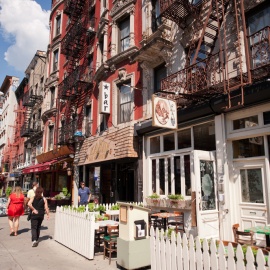 Hotels & Things to Do in East Village

7B Horseshoe Bar aka Vazacs

Once considered part of lower Manhattan, this famous New York City Borough became famous during the 1960's when the residents wanted to disassociate their area from the slums in the lower East side. From this came the high brow name now used to refer to this part of New York--the East Village. In the 1800's it was part of the Dutch Governor's family for seven generations. Once it was sold off to investors through the years, it became home to incoming immigrants from around the world. In the 1960s it was part of the hippie, political dissident, and beatnik movements. Now East Village is home to students and young professionals. New York University and Cooper Union Art School are part of the landscape here.
This very Bohemian area is home to different neighborhoods such as Alphabet City, Losaida, St. Mark's Place, and The Bowery. Each one has fallen into and out of fashion throughout history. Today, it is very fashionable to be part of the East Village scene--a place to see and be seen. In Alphabet City, there are housing projects with thousands but the fashionable scene is moving its way towards the river. Soon, there will be high rise condominiums with views of the river that sell for millions. And this area will regain its fashionable address once again.

Our weekly guide of things to do in

New York City has a legendary nightlife presence and sometimes your night can get pretty out of control. If you want the privilege of drinking at a bar or club, and then being able to sleep or relax...

Bars Open on Christmas in NYC

Want to spend Christmas in NYC out on the town drinking with your friends and family and not have to worry about the mess? These

From ugly sweater parties to bar crawls, Christmas in New York has fun in store just for you! New York Christmas events are the perfect holiday activity&nbs

Bars Open on Thanksgiving in NYC

Thanksgiving in NYC is one of the most legendary holidays to celebrate in the city. From the

Halloween in New York is always the biggest party in America! The whole city goes all out and the best bars in NYC are throwing parties. From costume contests to holiday bar

Things To Do in NYC This Weekend | September 26-29

Events in New York are never boring. With school in session, this weekend is a perfect time to unwind with some fun things to

Things To Do in NYC This Weekend | September 19-22

Got plans this weekend in New York? From Oktoberfest in New York to food festivals, events in NYC are loaded with fun for everyone

Oktoberfest in New York is set to include some of the most fun events this Fall! From breweries in N

Yoga is usually associated with stretching into poses and breathing slowly but it's also known to greatly increase your strength, posture, flexibility, heart, and mood. From just beginning to advanced...

Where To Find Delicious Smoothies in NYC

Everyone loves a good smoothie, but which juice bars and coffee houses in NYC are whipping up the best fruity concoctions? These

Things To Do in NYC This Weekend | August 1-4

The 212 has so much going on this weekend, but what events and things to do in New York City are tailored to you? From pool parties to big-name concerts, this list of the

If you're looking for some fun nightlife and things to do in NYC check out these cool retro gaming bars perfect for anyone who loves to drink and game. An arcade bar in New York

Billiards is the best and original bar game for anyone who wants to challenge their friends or a date. It is a great recreational activity but these pool halls in

August 17th is National Thrift Shop Day in New York City and that means great deals at the best thrift shops in NYC! Save big this August with amazing specials and promotions at the b

Looking for some fun things to do in New York that can be done indoors? It's often cold, which is lightly spoken, so

Poke bowls in New York City are a great meal to satisfy hunger and taste delicious fresh ingredients. Poke bowls can have so many different ingredients you could say i

Some people get by with just the nightly specials in New York and that's perfectly alright. I mean what's better than saving money and getting full on the best

Best Tacos in NYC | Mild to Hot and Everything in Between

Mexican restaurants in New York are bountiful serving up some unique but still delicious tacos to make you want more. Which of these hundreds of

Dining in New York can almost feel like you're eating internationally already, having thousands of restaurants of all different nationalities and cultures. Which of t

Best Cheap Eats in NYC | Dining on a Budget

Looking to dine out on a budget? You can have the pleasure of eating somewhere new (or old) and saving some money for a delicious fresh-cooked meal.  New York City has a plethora of unique...

Best Margaritas in NYC to Spice Up Your Night

Mexican cafes, tequila bars, and salsa clubs are just a few of the places to find margaritas in New York City, out of the millions of establishments making them. That might be an

Sushi is not for everyone but yet it's on every corner of every block in New York. If you live in New York you've probably grown custom to eating some of the Japanese fares. On the other hand, if you...

Bagels are the supreme breakfast in New York going well with cream cheese, lox, bacon, peanut butter, and so much more! New York is the creator of bagels in the