Add My Business Add My Event

Review for The shrine Brooklyn by alex
Rating:

It’s a place to be the staff were professional and the food was great
Pros: It’s just love and good food
Cons: Just that there isn’t parking in the neighborhood

Korean BBQ is one of my favorite genres of food! It's a fun and interactive experience here at Gunbae Tribeca!
Review for Four Seasons Hotel New York Downtown by Holly
Rating:

Housed in one of the city’s tallest residential towers, The Four Seasons New York is conveniently located in Downtown NYC, in the heart of Tribeca, and just a block from ..
Review for Elena Klimenko, MD - Functional Medicine by Lola
Rating:

Dr. Klimenko is a very knowledgeable medical professional. She finds the underlying source of your symptoms and creates personalized treatment plan for every patient. I strongly recommend Elena to my ..
Pros: I have only positive experience.
Cons: none so far.

Review for My Smiles Orthodontics of Queens by Natalie
Rating:

Very nice people and very good treatment. An awesome place for sure.
Review for My Smiles Orthodontics of Queens by Jennifer
Rating:

I would definitely recommend My Smiles Orthodontics of Queens , They doesn’t disappoint. 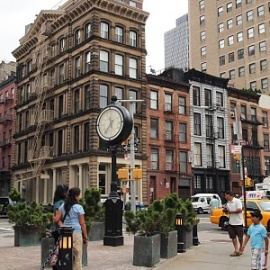 Hotels & Things to Do in Tribeca View All

Nightlife in Tribeca View All

Restaurants in Tribeca View All

Shopping in Tribeca View All

TriBeCa is a must-see area for anybody travelling to New York City. The neighborhood, whose name is a shortening of ?Triangle Below Canal,? stretches between Broadway and the Hudson River. Bloome and Barclay Streets are considered its north-to-south borders. TriBeCa is rich in historical architecture, and artists, retailers and families all take up residence there. Area attractions include the Skyscraper Museum, Hudson River Park and the Woolworth Building, which was the world?s tallest building from its construction in 1913 until 1930. Tours of TriBeCa include a Historic Walking Tour of industrial and residential buildings from the 19th century, and the TriBeCa Open Artist Studio Tour (TOAST), a free self-guided tour of artists? studios. TOAST runs in the end of April and about 100 artists participate each year. Another top attraction is the TriBeCa Film Festival; founded by Robert De Niro to revitalize the city after 9/11, the festival takes place in late April/early May and can screen at least 200 movies in its duration. Shopping in TriBeCa is upscale and, for the most part, expensive. The area holds an extensive collection of decor and furniture shops, including Highland Park, Duane, Urban Archaeology, and Burden Antiques & Works of Art. Plenty of other shops abound: Color Me Mine is a family-friendly, moderately priced workshop where customers can paint their own ceramics; La Lunia is an artistically arrayed clothing boutique; Pearl Paint is one of the country?s most extensive art supply stores. TriBeCa has plenty of variety for dining. A few of the top picks among critics and customers: Bubby?s offers inexpensive home-style cooking; the TriBeCa Grill is an occasional hangout for De Niro and other Hollywood types; Fresh is a seafood restaurant whose name says it all; Kitchennette features premier baked goods and breakfasts; The Harrison is a critically acclaimed, affordable bistro.

Our weekly guide of things to do in

Bars Open on Thanksgiving in NYC

Did your family elect you to take care of the planning for a holiday this year? Maybe it's Thanksgiving dinner or your annual family Christmas party, either way, you want to impress your guests and give...

Yoga is usually associated with stretching into poses and breathing slowly but it's also known to greatly increase your strength, posture, flexibility, heart, and mood. From just beginning to advanced...

Where To Find Delicious Smoothies in NYC

Everyone loves a good smoothie, but which juice bars and coffee houses in NYC are whipping up the best fruity concoctions? These

Tallest Buildings in NYC for the Best Views of the City

Sky views in the skylines is a great way to see the city and obviously, New York City's skyscrapers are legendary. You can see them from afar but when you're in the c

Things To Do Outside in NYC | Outdoor Recreation in New York

Outdoor fun isn't far in New York with so many parks, gardens, museums, and more things to do! Outdoor recreation in New York can be tricky if it's cold but f

Looking for new things to do in New York without breaking the bank? From huge, outdoor parks to unique boutiques, this New York things to do guide is perfect for anyone loo

Poke bowls in New York City are a great meal to satisfy hunger and taste delicious fresh ingredients. Poke bowls can have so many different ingredients you could say i

Looking for the hottest new restaurants in New York? These restaurants and bars will give you a fresh dining experience that should restart your palate for

Best Cheap Eats in NYC | Dining on a Budget

Looking to dine out on a budget? You can have the pleasure of eating somewhere new (or old) and saving some money for a delicious fresh-cooked meal.  New York City has a plethora of unique...

Sushi is not for everyone but yet it's on every corner of every block in New York. If you live in New York you've probably grown custom to eating some of the Japanese fares. On the other hand, if you...

Bagels are the supreme breakfast in New York going well with cream cheese, lox, bacon, peanut butter, and so much more! New York is the creator of bagels in the

Just about every block has a deli on the corner of it in New York. Which of these can classify as the best delis in NYC and what makes them unique? With hu

What makes the best Latin restaurants in NYC unique? Is it their rice and beans, ceviche, paella, or meats? Anyone of those could be your favorite part of a meal and is t

Looking to grab a beer that doesn't taste like water? Well, these craft beer bars in New York City have the taste and hops to make you appreciate drinking a cold one.&nbs

Want to go drinking with the luck of the Irish? With luck, maybe you'll even get a drink special or happy hour! These top 21 Irish pubs in New York City are loved

Taxi and Limo Services in NYC

The subway will always be the cheapest option for travel in New York City, but what are some alternatives for people in a hurry? Taxi and limo services in NYC can

Cigar lounges in NYC are often seldom but we've done the research and found the best in the 212! These cigar l

Our Dads are a special person in our lives, so why not take him to a Father's Day Event in New York City. Not only did they help bring us into this world but they are full of wi

Wine bars are everywhere in New York but which ones offer the most delicious options? These wine bars in New York City are perfect for

Looking for a bar to make you feel like you're in the south? New York has plenty of country bars that can give you just that!

Champagne and Cocktail Bars in NYC

Want to try the best cocktails in the best city to get a drink? New York City is loaded with beautiful cocktail lounges and champagne bars perfect for every type of patron. Tired after work or just...

Coming from out of town or just want to learn more about New York? Take a tour of the beautiful concrete jungle where dreams are made of! New York City has so much to offer and the tours w

New York's passion for sports is unmatched but where should you go to watch your favorite teams play? We've compiled a list of the best